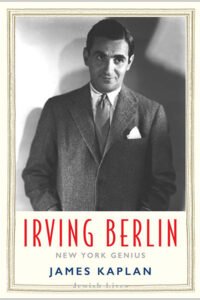 Irving Berlin (1888-1989) has been called—by George Gershwin, among others—the greatest songwriter of the golden age of the American popular song. “Berlin has no place in American music,” legendary composer Jerome Kern wrote, “he is American music.” In a career that spanned an astonishing nine decades, Berlin wrote some 1500 tunes, including “Alexander’s Ragtime Band,” “God Bless America,” “White Christmas,” and on and on. From ragtime to the rock era, Berlin’s work has endured in the very fiber of American national identity.

“James Kaplan’s Irving Berlin is just like its subject: taut, vibrant, and thrumming with the irresistible words and music of America’s songwriter laureate.  It’s by turns a buoyant and poignant trip across the tumultuous 20th century, through the eyes of an artist who helped define its popular taste. Kaplan reclaims the proud Jewish identity of the patriotic immigrant who knew that his country was blessed, because he had been.”

The Ted Snyder Company was, like every other successful publisher on Tin Pan Alley, a mill: a warren of small noisy chambers where not only the house talent, but song-pluggers and postulant composers pounded out would-be euphonies on battered uprights in cacophonous chorus. It would have taken a powerful imagination, not to mention an ironclad will, to conceive fresh musical ideas under such conditions: Berlin had both. One day in the summer or fall of 1910, a ragtime-flavored melody came to him, at work, “right out of the air,” as he recalled a few years later. “I wrote the whole thing in eighteen minutes, surrounded on all sides by roaring pianos and roaring vaudeville actors.” The “thing” — the understatement is nothing short of colossal — was the tune (apparently lyric-less at first) that would become “Alexander’s Ragtime Band.”