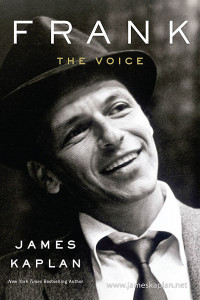 “This is biography at its very best — the story of a fascinating character brought to life as never before through superb writing, impeccable research and penetrating insight. It is a terrific book.” –Doris Kearns Goodwin

“Riveting and fast-paced…. Kaplan’s enthralling tale of an American icon serves as an introduction of  ‘old blue eyes’ to a new generation of listeners while winning the hearts of Sinatra’s diehard fans.” –Publishers Weekly

“There has never been a book of this kind or quality about Frank Sinatra…. This book tells it all with the freshness of the first time, in the most engrossing and evocative prose…. A magnificently resonant chronicle….” –Peter Bogdanovich

“The answer to ‘what is there left to say about Sinatra’ is staggeringly answered in James Kaplan’s new book. This story has never been told with such incisiveness, care, research and respect. With so many new revelations, you might really never know who Frank Sinatra is until you read this book.” –Michael Feinstein