Images from Frank: The Voice

Here are some of the images of Frank that can be found in the book. All images are used with permission and may not be reproduced. 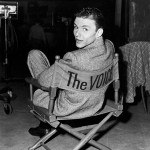 In connection with Frank: The Voice, James Kaplan, who has been a guest on NPR's Weekend Edition with Scott Simon, MSNBC's Morning Joe with Joe Scarborough, and Inside Edition, as well as Soundcheck with John Schaefer, Radio Open Source with Christopher Lydon, Dennis Miller Radio, and numerous other syndicated shows, appeared on Charlie Rose on February 18th, 2011: http://www.charlierose.com/view/interview/11491

James and Gary Giddins will discuss Irving Berlin: New York Genius at the Graduate Center at CUNY on February 5, 2020.

James will also speak at the 92nd Street Y on February 13.

“Genius is the operative word. The latest entry in the “Jewish Lives” series tackles perhaps the most prolific and important composer and lyricist in U.S. history…Kaplan, no stranger to daunting subjects…has written an extensively researched, entertaining, and nuanced account that contextualizes Berlin’s story and achievements within the scope of Jewish immigrant New York and modern American popular culture.” – Library Journal.

“Short but robust and richly rewarding…Kaplan vivifies Berlin and…brings his deep knowledge and wise insight to Berlin’s life story so that even his most classic songs like “White Christmas” feel like a new discovery.” – The National Book Review.

“One senses on every page Kaplan’s enthusiasm for his subject as well as his deep knowledge.” – The New York Journal of Books.

“Kaplan excavates psychological depth beneath the blithe melodies…a smart, entertaining biography of a great songwriter that will have readers humming along.” – Publishers Weekly.

James on the Jewish Lives Podcast

Irving Berlin has been called-by George Gershwin, among others-the greatest songwriter of the golden age of American popular song.

James on Irving Berlin on NPR

James on Berlin at the Detroit Jewish Book Fair


Raves for Sinatra: The Chairman


James on Frank and Billie, BBC2


Frank Delaney interviews James about FRANK: THE VOICE and SINATRA: THE CHAIRMAN

James Kaplan has been writing noted biography, journalism, and fiction for more than four decades. The author of Frank: The Voice, the definitive two-volume biography of Frank Sinatra, he has written more than one hundred major profiles of figures ranging from Miles Davis to Meryl Streep, from Arthur Miller to Larry David.